A downloadable game for Windows, macOS, and Linux

An atmospheric 6DOF horror experiment made for the Haunted PS1 Summer Jam with the theme of architectural horror. This was my first 3D project and I had some difficulty finishing it so it's a bit rough around the edges... Controller recommended.

Special thanks to Mr. Bedbug for helping with story and planning!

This one's probably my favorite, though Exfiltraitor and Wirez are a close second. Nice job.

I really enjoyed this game, with it's kinda physics based mocement and feeling. Thx for this good experience.

Looks great, though I'm unable to get my DS4 working while running on Linux, though I have the proper drivers and it works with other games; not sure if there's a godot engine piece I need or something.

Hmm what distro are you on? DS4 worked for me on Ubuntu 18.04, I'll check and see if maybe there's an export setting I missed or something.

I forgot the most important bit of course; running the latest Arch Linux release, usually in these situations it's just a package or two I need to download rather than something on the program's side, though I don't see any helpful warnings when launching from a terminal.

Honestly, you did an amazing job. The nostalgic design, the space-terror atmosphere (which in my opinion is being enhanced by the old graphics) and the 'twist' at the end of the game, definately created a memorable experience, even if the game itself was short. I would love to see more 3D projects made by you and hell, maybe one day I will be able to make one myself. Keep it up man!

Incredible game! And even more incredible it is your first 3d game. I made something similar quite a while ago now:

I would love to talk technical details with you!

Thanks! Have any questions? I basically just hacked together some rigid bodies with joint constraints to get the drone body and arms to work, and then when you pick stuff up it just connects it to the drone with another joint constraint.

I have a couple of them! First off, how was the level geometry created? Did you model and texture map it by hand or use something more procedural? For my project I used marching cubes and a triplanar shader to procedurally generate a few different types of cave system.

How was the dithering effect achieved? I've used Godot a little bit (excellent engine choice by the way, open source ftw) so I don't know if it has a built in full screen dithering shader or if there is one available. If not how does it work?

Were there any features or mechanics that you considered and cut for time or some other reason?

All of the level geometry I made in Blender and there's only like 3 or 4 textures in the entire game lol. This was my first time making any kind of level geometry so I pretty heavily relied on repeating textures to skin everything. Your method sounds cool, I just basically pulled on vertices until I had something that looked acceptable.

Dithering effect was achieved with a shader I found somewhere... In Godot you just use a fullscreen ColorRect node and read the screen texture in the shader. Same goes for the CRT effect.

Originally the game was going to be set in a space station and be more puzzle/exploration oriented, kind of like an escape room. I was having a lot of trouble stringing things together and filling everything out so like halfway through I scrapped it and went with this linear environment instead. I worked on a "lost woods" style mechanic where you had to navigate through a maze of hallways and taking the wrong turn would teleport you back to the start. I was really proud of that as the teleport worked seamlessly even when carrying an object and in any possible orientation, but unfortunately I didn't think it really fit with the game's final environment so I cut that. I also had a big cable that you could drag around and plug into different sockets, but it was a bit janky so it didn't make the cut either. The lasers in the calibration room originally were intended to start with only one on and then you would point them to another node and they acted like mirrors, but it was difficult to make a puzzle out of it.

Genuinely good zero-g simulator. If you could fix the clipping, I'd love to just whoosh around in a space forklift.

Thanks for checking my game out, sorry you ended up running into a few issues with the clipping... wasn't sure how to fix that, but it seemed like it was always possible to wiggle free. The square moving around on your HUD represents the drone's thrust vector, the direction you are traveling in. It's really just meant to be a bit of decoration similar to the display in a fighter jet or a drone camera.

Outstanding entry as usual. I loved the visuals and sound. I raged at sticking crystals in. Great job!

Thanks! You are not the only one that had a problem with the crystals :D

fantastic game! I really enjoyed it.

Thanks for checking it out!

Was an interesting experience my friend. Keep it up, you have great talent.

oh my god, you absolutely need to develop this further with more puzzle, this is amazing

Thanks! I designed a few more mechanics that didn't end up making it to the final game. Maybe one day I'll dig this project up and do something more with it :) 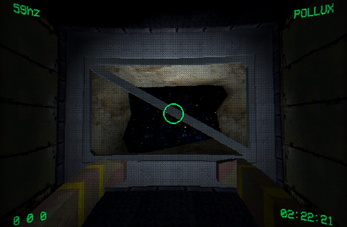 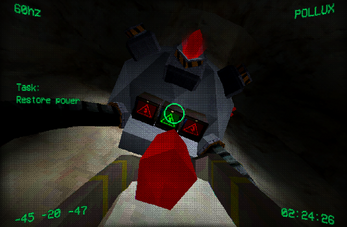