The Future of Fiend's Isle

Hey everyone! I want to go over some of my rough plans for Fiend's Isle and give some context for what currently exists in the demo version. Before we dive in though, I want to thank everyone who's tried the first demo! It's been really awesome to hear that people have enjoyed what’s in the game so far. I really appreciate all of the feedback and interest in the game and I look forward to hearing more.

I began development on Fiend's Isle around Fall 2020 as my first long form game project that I intend to commercially release on Itch and Steam. I've been a programmer for around 15 years, but only started taking game development more seriously in late 2019. I still have a lot to learn, so I want to keep working on smaller projects and putting my acquired skills back into Fiend’s Isle as I go. 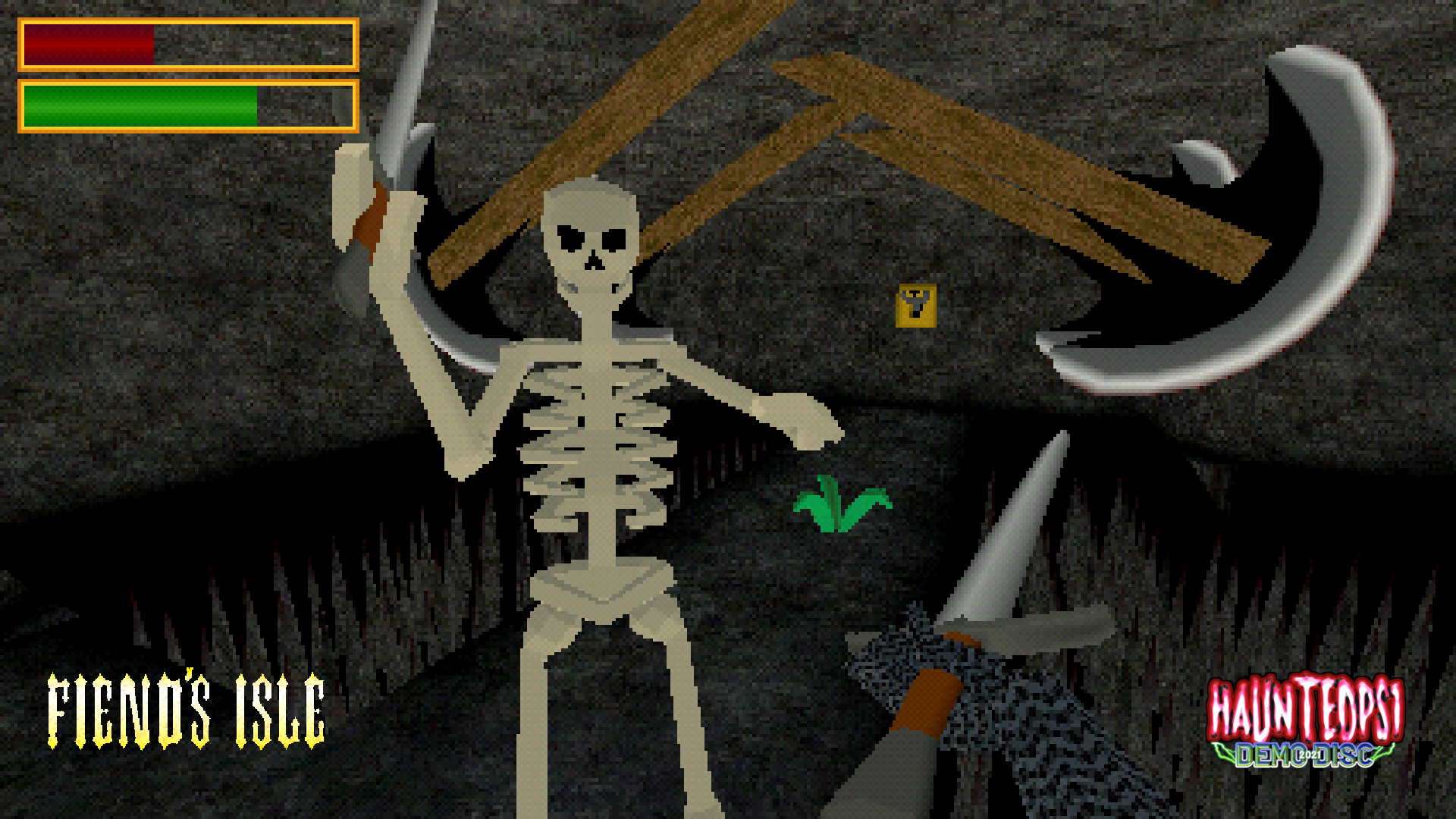 When I started this project, I knew I wanted to have a proof of concept demo complete enough to submit to the Haunted PS1 Demo Disc 2021. There was a deadline for submissions, so for the demo version I very intentionally tried to build out a number of mechanics while not worrying too much about balance and nuance. I wanted to communicate an idea of what the game could be within an approximation of the first level. So then, what could the game be?

tldr: I want Fiend's Isle to mix the first person combat of games like King's Field and Morrowind with the game structure of roguelikes like Spelunky and Binding of Isaac.

When it's done, I'd like a "run" of the core game to take around 40 minutes across 4 unique levels. A lot of existing first person roguelikes seem to take a puzzle piece kind of approach to their level generation where each area is kind of just a re-skin. What I want to do instead is give each level distinct general layouts and style, with enough RNG to force you to explore and experiment each time you play. 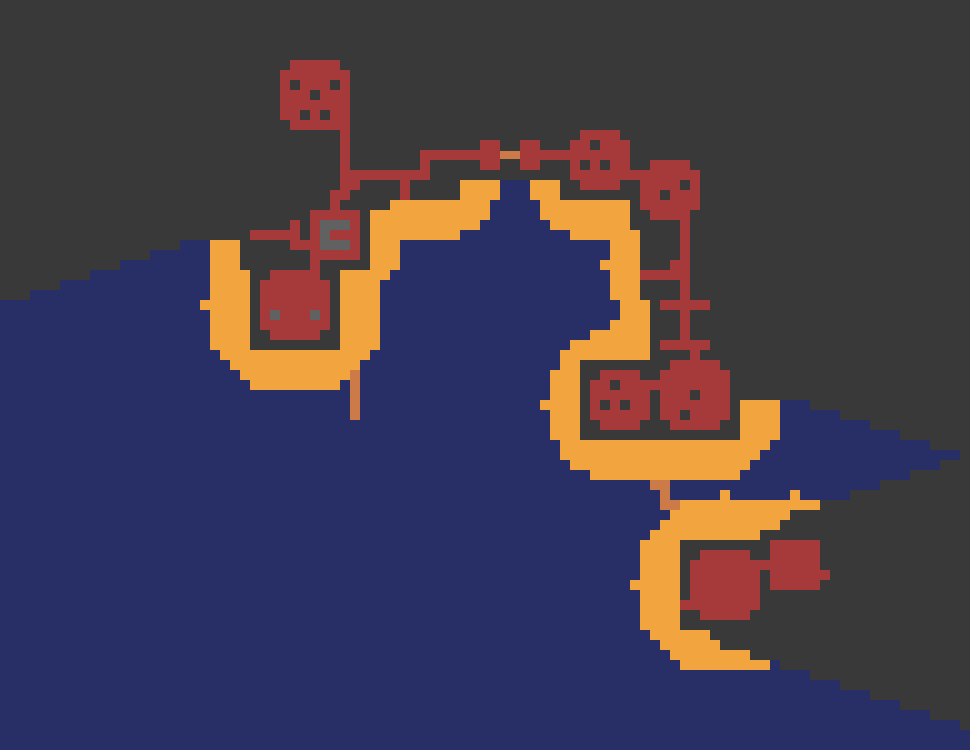 For example, the first level always generates 3 "islands". You spawn on the first island where you need to find the lever to lower the bridge to the second island. On the second island you need to find the key to unlock the door on the third island that lets you complete the level. I want each level to have these "quest lines" that you learn to complete, but can't just run through because the layout gets scrambled each time. In addition to each level's primary quest, there will also be optional sub quest's where you will be able to get powerful items or unlock secrets. I wanted to add a fourth optional island to the first level with a lighthouse where if you've played King’s Field II you can imagine what might have been found there.

Once I actually have enough content, things like chests and wells will give you random items that should mix up your playthrough. At the same time, each level's unique enemies and environments will give you ways to consistently acquire certain items. I also plan to add merchants and other NPCs that you can interact with to get even more loot.

I've heard many of you point out that the RNG directly conflicts with a game like King's Field's (and other FROMSOFT games) expertly crafted level design, and you're not wrong about that. I hope that by the end of development I'm able to deliver an engaging re-playable experience that is enhanced by the RNG rather than hurt by it. At the end of the day, I know the roguelike elements are just not going to be for everyone and that's okay too.

I'm going to be taking a bit of a break from adding content and mechanics to Fiend's Isle. I need to clean up some of the code and I want to work on more game jams and collabs. Before the end of the month I do want to release a patch to the demo that fixes a few bugs and maybe even adds a bit of the content I planned, but didn't quite get to.

For the fellow game devs out there, I can't commit to a time frame, but I would also really like to package up a version of my dungeon generation and authoring tools to be released as a Godot plugin for everyone to use. If I can boil it down to something generic enough, I'd also like to release a version of my player controller. I really love using the Godot engine and I'd like to give back as much as I can to the community.

At this moment I don't have any budget for Fiend's Isle. It's going to continue to be a passion project of mine with the exception of my good friend, Izumi, who is working on the soundtrack. I'd like for the game to look nice and be able to pay an artist or maybe even get a publisher one day, but I don't have any plans for that at this time. That means it's going to take a while for Fiend's Isle to be complete as I work on it in my free time. No promises, but I hope to at least release the second level by the end of the year.

I'm going to be pretty open about how development is going so stay tuned and follow me on Twitter where I'll try to post behind the scenes stuff as frequently as I can. Also please wishlist Fiend's Isle on steam, and if you haven't already, please give me a good rating on Itch! Both of these will help me win favor with the almighty algorithms.

Really nice so far. The music, the graphics, gameplay. I really like it!

If you ever finish the Full Version of this game, can you possibly port this to the Nintendo Switch?

I'd love to have it on Switch! I've got to get a lot done first, but I'll try to make it happen one day :)

Awesome! will definitely wait till then!

This demo was incredible, legitimately can't wait for the full version. Day 1 purchase for me, but take as much time as you need.

i can’t wait. The demo really impressed me. Take all the time you need and i’ll be following closely